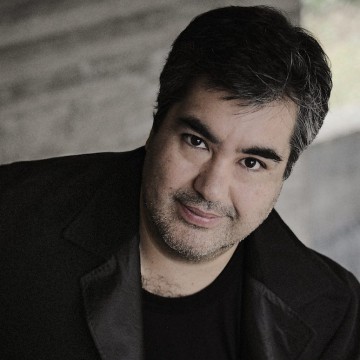 Brazilian Tenor Ricardo Tamura was born in Sao Paulo, to a Japanese father and a Syrian mother. (Both second generation of immigrants.)
Because he showed very early signs of high intelligence, his parents expected him to become a scientist, a career that he loved and passionately pursued during his early years. He wanted to learn everything about the Universe and outer space.
So, before the age of 20, he already had two college degrees (in Geology and Physics), and had become an assistant Professor, at the University of Sao Paulo. Right after graduating, he received invitations to work in many international projects, including one with the Massachusetts Institute of Technology (MIT), the institution which had been his childhood dream.
But, as things turned out, he could never go to MIT because of problems created by the Brazilian bureaucracy at the time.
During his last college years, he had been taking voice lessons as a hobby, and his teacher at the time had told him that he had a good voice for Opera…. Although this never sounded like a possible career for him, out of frustration with the problems that kept him from going to MIT, he decided to do an audition to the Opera House in Sao Paulo… And he was hired!
Still not believing in the outcome, he flew to the USA, in order to hear the opinions of more acknowledged people.
There, he met the legendary soprano Licia Albanese, who also told him, even more enthusiastically, what he had already heard from his Brazilian teacher…
After a relatively short study time which included the Juilliard School of Music in NY, six months in Italy under Carlo Bergonzi, private lessons with Licia Albanese and the International Opera Studio in Zurich, he got his first job as a singer, in Germany.
After his debut as “Armando Cellini” in Raymond’s Operetta “Maske in Blau”, he went on to sing around 50 leading Opera and Operetta roles all over Europe.
In 2013 he made his debut as Cavaradossi (“Tosca”) at the Metropolitan Opera in NY, and has been performing regularly there since then.
In this Season, he was seen as Turiddu (“Cavalleria Rusticana”).
His most performed roles, besides Cavaradossi and Turiddu, include Otello (Verdi’s “Otello”), Don José (“Carmen”), Calaf (“Turandot”), Canio (“Pagliacci”), Alfredo (“La Traviata”), Sou-Chong (“Das Land des Lächelns”), Riccardo (“Un Ballo in Maschera”), Des Grieux (“Manon Lescaut”), Rodolfo (“La Bohème”), Duca di Mantua (“Rigoletto”) and Radames (“Aida”), with which he had his debut at the Arena di Verona.
He has worked with many important conductors, including names like James
Levine, Marco Armiliato, Fabio Luisi, Yannick Nézet-Séguin, Daniel Oren, Lothar Koenigs, to name just a few.
Although he loves and feels a deep connection to Japan he has only been in this country twice, in 2008 as he did a concert in Nagoya celebrating the 150 Anniversary of Puccini’s birth, and in 2016 giving a concert in Tokyo.